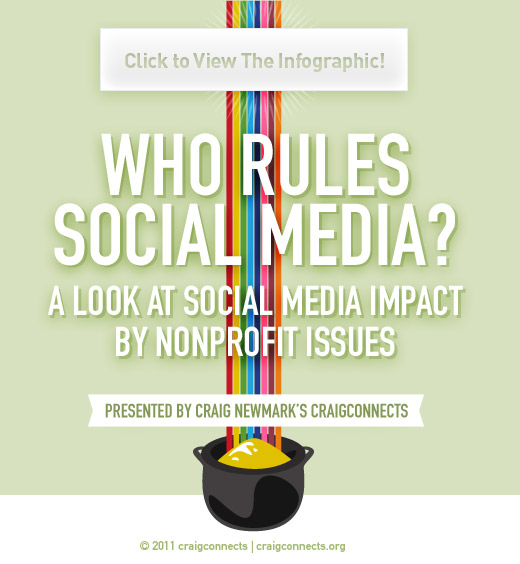 So, a few weeks ago, the craigconnects team researched how the top 50 nonprofits do social media. We decided to dig a little deeper to find how nonprofits by area of focus use social media and what kind of an impact that they were having in the social media space.

From August to October of 2011 we analyzed the top 5 nonprofits in the following categories based on total expenses provided by Charity Navigator:

We broke down the data even more since the last infographic to answer some follow-up questions that folks had and satiate our own curiosity. Instead of just looking at the information over the course of two months, we went even further and looked at the average number of posts and replies the nonprofits were submitting on both Facebook and Twitter per week.

We researched how often organizations are posting on different social media platforms, what nonprofits are being talked about the most: mentioned on Twitter and talked about on Facebook, and whose words are having the most impact on their communities.  And, we found some cool stuff:

We also talked with several of the organizations by phone and email and asked them how many social media staffers work for them and whether they were part time or full time and if their social media responsibilities were incorporated into different job roles such as online advocacy, online communications, etc.

Out Of 21 Organizations We Spoke With:

It was interesting to see that environmental groups were at the top of the list as far as posting, tweeting, and talking back to their users, yet they fall at the bottom of the totem pole in regards to being talked about. Luke Franklin, Director of Member Communications at ASPCA explained that for their Animal Organization, “engagement is what pushed our numbers as high as they are.”

While it is remarkable to see the variations in social media use by area of focus among nonprofits, the bottom line is that your main concern should be to cultivate conversations, relationships, and interactions within your own specific community, whether it’s 2,000 or 200,000 people. Work to move “your people” up the ladder of engagement, based on their needs. But know it will take an investment of staff time and resources to achieve this. These are the keys to keeping up in the fast-paced arena of social networks.

Check out the full infographic here.

0 thoughts on “Who Rules Social Media? A Look At Social Media Impact By Nonprofit Issues”