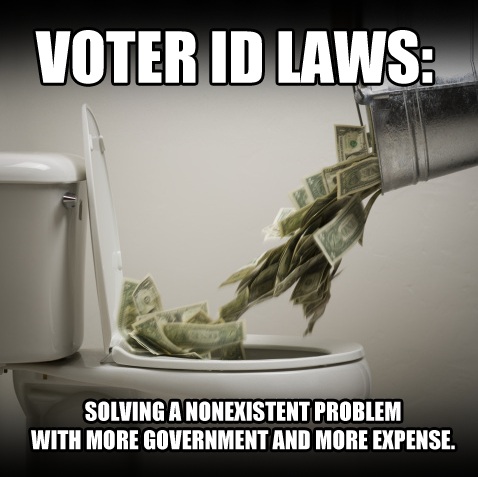 Folks, here’s the deal, there are some real bad actors out there trying to implement laws to stop eligible people from voting. What I learned in high school civics class is that an attack on voting rights is virtually the same as an attack on the country.

Many outlets have been acknowledging that Voter ID laws are a waste. Doonesbury began a comic series about it last week, and articles, like that in the Washington Post, have explained that Pennsylvania “knows that voter fraud is a nonexistent problem, but will nonetheless defend a law that could potentially disenfranchise a huge number of the state’s voters.”

Pennsylvania House Majority Leader Mike Turzai even admitted that Voter ID laws are a tactic, when he said, “…Voter ID, which is gonna allow Governor Romney to win the state of Pennsylvania, done,” at the Republican State Committee meeting.

All of these voter suppression laws are really targeting minorities, students, the elderly, as well as voters with disabilities. We need to prevent bad legislation from preventing people to vote in the 2012 U.S. election.

There’s no real need for Voter ID Laws. It’s just those bad actors trying to stop people they don’t want voting from doing so. They really are solving a nonexistent problem with more government and more expense. Voter ID laws could cost taxpayers $65.8 million in 4 states: PA, IN, NC, MI. All of these states had huge budget shortfalls in 2011.

Protecting the Vote explains that between 2000 and 2007, there have been 352 deaths caused by lightning, 32,299 reports of UFO sightings, and only 9 instances of possible voter impersonation. As Rock the Vote says, “You have a better chance of being struck by lightning than seeing voter fraud.”

Real efforts will come when one can talk Google, Facebook, and others to get involved with Voter Protection and Voter Registration.

To get more involved, check out our Voter Protection resource list, and remember that National Voter Registration day is September 25th.