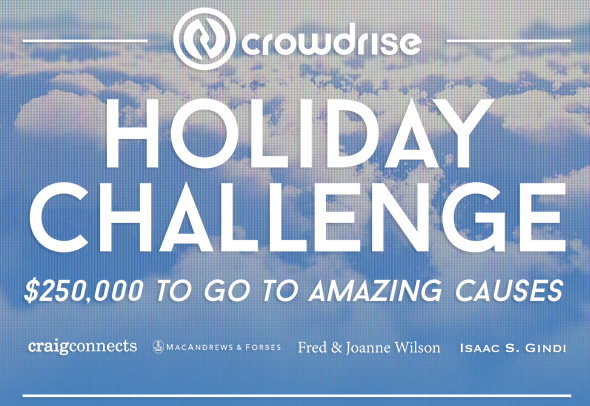 Folks, I just got an update from Ed Norton, one of the co-founders of CrowdRise, about the #GivingTower Holiday Challenge I’m sponsoring with MacAndrews & Forbes, Fred & Joanne Wilson, and Isaac S. Gindi. This year I’m giving $50k to support nonprofits.

A total of $250k is being given away in prize money, but an impressive $2 million+ has already been raised by the nonprofits participating. Last year, at this point in the Challenge, the total raised was: $609,835. That’s $1,561,954 more raised right now than was raised at this same time last year. This is the real deal.

Each time a donation’s made, a brick is added to the #GivingTower. What does this mean?

It’s inspiring to see the organizations putting in lots of effort and  taking the lead. They’re orgs that aren’t household names, but instead charities like the Cure JM Foundation – which works on an extremely rare disease affecting children, and small but mighty animal reserves.

The Bonus Challenge winners so far are…

And there was a Surprise Bonus Challenge: Blue Ocean Society for Marine Conservation

Bonus Challenge # 3 is happening now. Every org that gets 10 donations will be entered to win $10k. You’ve got til December 16th to get the donations. And there’s still time to sign your org up to participate in the Challenge.

Sign up here (by Friday December 19th) to join the Holiday Challenge…! More to come. 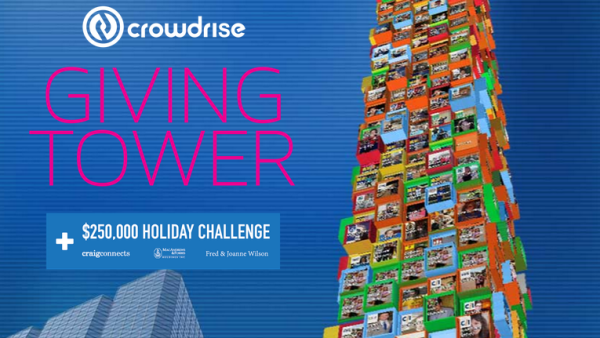 Folks, I believe that it’s really important to give back to our communities. One way to do that is to participate in CrowdRise’s #GivingTuesday Holiday Challenge for nonprofits. I’m giving $50K to go toward the winner of the Challenge, and together, with the other donors, there will be $250K in prize money.

CrowdRise has been working hard to make this Challenge and #GivingTuesday bigger then past years. One way they’re doing that is by creating a Giving Tower. It’s going to be a hologram tower. Each time someone donates, a brick is added to the tower. You can actually download an app and point it at a dollar bill to see how the tower’s growing. Here’s a little more about it:

The Giving Tower Holiday Challenge is a great way for organizations to rally their supporters, raise money for their cause, drive engagement, get lots of exposure and, most importantly, raise money for their cause (note intentional repetition). The Challenge is friendly fundraising competition launched by craigconnects, Fred and Joanne Wilson, and MacAndrews & Forbes. It’s designed to help you raise awareness and lots of money for your year end fundraising.

Here’s more about the Challenge this year:

Looking forward to getting this Challenge started, more to come…